PLANES OF FOCUS is delighted to 'premiere' a version with English subtitles of a beguiling and funny short film that Argentine director Lucrecia Martel made for notodoFILMFEST (2010).

Pescados/Fish was written and directed by Martel, edited by María Onis, with sound, music and voices by sound artist and singer-songwriter Juana Molina.

Of course, this is an entirely fishy little curio, replete with classic, art-cinema, coy (or koi) withholding. Not everything you hear is translated in the subtitles, and any ridiculous resemblances to the storyline of La mujer sin cabeza/The Headless Woman are very probably purely coincidental, and thus critically indefensible... But, as the clippings below indicate, the themes and staging of this hypnotic short film can't help but comically evoke the watery depths of much of Martel's earlier work.


"[In La niña santa/The Holy Girl,] Martel stresses the sensuality of close quarters, the pool, the idle hours of the siesta, and late night."

[...]
"As in La ciénaga[/The Swamp], water has a pride of place in the film’s symbology, with the splashes of the thermal pool adding one of the most indelible sound effects."
[Dominique Russell, 'Lucrecia Martel — a decidedly polyphonic cinema', Jump Cut, No. 50, spring 2008]

"There’s plenty of mordant humour in Martel’s films: the title [of La mujer sin cabeza/The Headless Woman] is a waggish nod to B-movies; there’s a running joke about the state of Vero’s hair. But the dominant mood is dense with mystery and innuendo: why, for instance, do the women in the film keep talking about turtles in a local swimming pool?"
[Sukhdev Sandhu, 'The Headless Woman, review', The Daily Telegraph, February 18, 2010]

"I like to shoot in swimming pools, though, because it’s like a room, below the level of the ground, full of water. There are many similarities between the behavior of a body inside a swimming pool and out of the pool. Both are in an elastic space. It’s fluid. The sound outside and the waves inside the pool both touch you in the same way. I think there are a lot of similarities in perception—between being in a pool and being in the world."
['An Interview with Lucrecia Martel, director of The Headless Woman', by Chris Wisniewski, Reverse Shot, Issue 25, 2008]

"During the last Latin American Film Festival in London, during an interview with Maria Delgado, Martel accepted that the image of a fish tank was ‘quite perfect’ to characterize the particular atmosphere of her films. ‘In real life we live immersed in an elastic fluid, it might be water but also air. We usually forget that we are immersed in air’, she said."
[Cecilia Sosa, 'A Counter-narrative of Argentine Mourning: The Headless Woman (2008), directed by Lucrecia Martel', Theory, Culture & Society, December 2009 vol. 26 no. 7-8 250-262]

This new version with subtitles in English is shown here with the permission of the filmmaker. Warm thanks go to her, and to Cecilia Sosa. The original version is available online here.
Posted by Catherine Grant at 05:07

Welcome to PLANES OF FOCUS

An online gallery-archive curated by Catherine Grant to gather scholarly and related resources on the films of Argentine filmmaker Lucrecia Martel. Some of these were created as part of a symposium on Martel's work which took place at the University of Sussex, UK, on June 9, 2011, hosted by the Centre for Visual Fields/School of English and the School of Media, Film and Music. 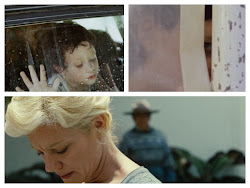 People in my films always act as if nothing bad is happening. There is fakery all the time. My films are political in this sense: to make a film is to share the doubt about reality.

Martel used shallow depth-of-field, or compression, in her previous films to bring her central characters, members of Argentina’s bourgeoisie, into relief against their surroundings and the huddled bodies that crowded around them. In The Headless Woman, her use of compression is even more purposeful. It illustrates [the main character's] “separation from reality” [...]. The plane of focus remains on her because that separation is part of the subject of the film.

"How can we locate the political in relation to [Martel's] films? While [La ciénaga/The Swamp and La niña santa/The Holy Girl] are too unstable to be read as allegories, they do demonstrate a self-reflexive concern with questions of perception, meaning and interpretation, which […] address precisely the anxiety coming from critical readings".

"Both reflexivity and minimalism in Martel's work can be read as aesthetic responses to the same phenomenon, a folding-in of structures of signification associated with the merging of public and private spheres and the erosion of a distinct space for meaningful political action."

[La mujer sin cabeza/The Headless Woman] offers a frightening mirror in response to the guilt that flows from one time to another, embracing successive generations. In doing so, the film invites viewers to consider the distortions of their eyes, and eventually to re-make reality. Of course, [it] also offers the option of responding through refusal and denial. But the film sets its own conditions: in its context silence means complicity and ultimately to remain captured in the old machinery of guilt."

PLANES OF FOCUS Videos at VIMEO

PLANES OF FOCUS was created and is maintained by Catherine Grant.